skip to main | skip to sidebar

Family of the four-legged variety

Aren't these just the cutest babies ever??? (The correct answer to that question is YES!) 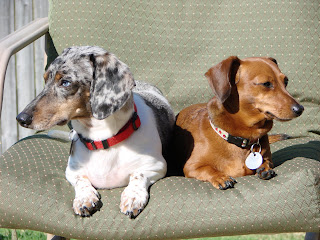 Let me introduce you to my two four-legged kiddos.
This is Ladybug, more formally known as "Ash's Little Princess Ladybug" 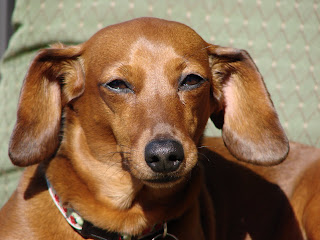 She is a full of energy, loyal, loving and highly opinionated. She is a miniature dachshund who weighs about 9 1/2 pounds. She thinks she's a pit bull and pretty much in charge of the universe. On the flip side, she is the sweetest, most loving and loyal animal ever. She is OCD and has some pretty big hangups (which can be quite entertaining!). AND (party bonus), she's a "Momma's girl!". Her favorite place to be is in my lap, which is perfectly all right with me! When the rest of the world gets angry with me, I know my baby girl will be right there with a kiss and some love for mom!
This is Oscar, more formally known as "Ash's Little Man Oscar" 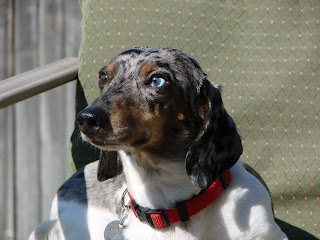 Oscar is in many ways the polar opposite of Ladybug: he's laid back, rarely says much, and pretty much down right lazy. He, too, is a "mini" dachshund (although at 18 pounds, he outgrew his breed). He's not fat (really), just big boned....probably bordering on the standard dachshund range (though he'd be a small standard). His favorite place to be is in Daddy's lap (probably due largely in part to the fact that Daddy will rub his belly endlessly). Oscar is registered as a piebald, which means he's white with spots. Those spots happen to be of the "silver dapple variety". The dapple hits one of his eyes (so he has one blue eye/one brown eye). He's quite an unusual little fellow.
I'm not sure if you can tell by the look on her face in this photo, Ladybug is not at all fond of the snow.... 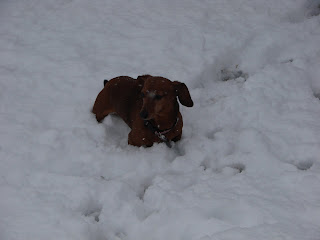 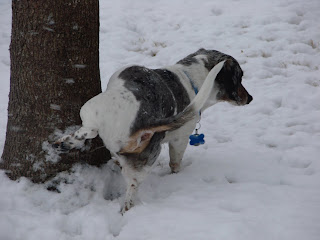 As you might be able to tell, I think a whole lot of these two little semi-humans. As you get to know me, you will also get to know them. Oscar will be 8 in May; Ladybug will be 9 in July. As they age, sometimes I worry about what life will be without them. But for now, I'll just enjoy my life with them in it!
Posted by stacief at 9:15 PM

stacief
I am a semi-retired mom of a beautiful teenage daughter and two miniature dachshunds. My hubby loves to fish and encourages me in all of my eclectic interests. I love to cook, read, and lately...watch t.v.